This is a quick, simple cake that is great for using up the bottom of a jar of applesauce. My grandma used to make applesauce cake and while this isn’t her exact recipe, it does stir up fond memories. My favorite part of this cake is how the top turns into a crunchy layer while the cake is soft.

Print
Applesauce Cake
Author: Andrea
Recipe type: Dessert
Prep time:  15 mins
Cook time:  60 mins
Total time:  1 hour 15 mins
Serves: 16
Ingredients
Instructions
3.5.3208
I’ve been meaning to put this article out here for a while. These are just my personal opinions on flour and food. I make no claims to know what is really affecting so many people’s bodies. Is it gluten? Or is it too much sugar? Too much processing? Too many chemicals? Or a combination of all of these things?
I don’t really know the correct answer – and honestly, I don’t think anyone really does. But, like most people, I have some thoughts on the subject. And once in a while someone asks me why I mill my own flour. People might be aware that white flour isn’t that great for us, but they wonder if there is really much difference between store bought and freshly ground whole wheat flour. And honestly, when I was first introduced to the concept of flour milling, I wasn’t sold on the idea that it was so much healthy. But it didn’t take long for me to be convinced. All I had to do was make a loaf of bread using the freshly milled flour and I was converted. The dough was softer than any dough I’d made using whole wheat flour. And the bread tasted fabulous.
I think that because we don’t hear about flour milling very often that people assume it must be something that is difficult or time consuming. If you’ve been to one of my classes, you already know that it’s neither of those things. If you grind your coffee beans most mornings, then you are already exerting the same amount of effort as I do when I grind flour. So, it’s not hard. And as a mother of four who occasionally fits in a little civil engineering on the side, I honestly don’t have time for anything that adds an extra challenge. But I do make time for things that I feel make a difference to the quality of my family’s food and health – and flour is one of the easiest places I’ve found to make a difference. Plus baking your own bread is a rewarding and relaxing experience in its own right. 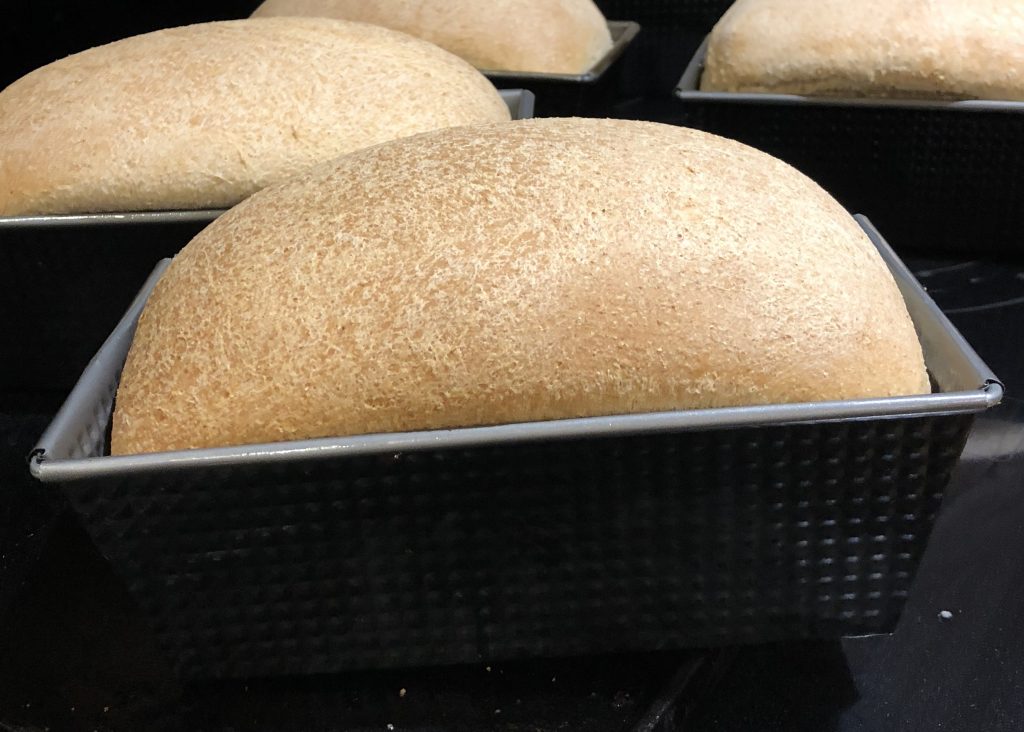 This is essentially the same recipe that I teach in my bread classes, but it is adjusted for a smaller capacity mixer than the Bosch Universal or Ankarsrum.

The real trick to making this 100% whole grain bread work is using freshly milled flour.  If you try making this with store bought flour, it will end up being a very dense bread.  Consider yourself warned!

This recipe will give you a soft, beautiful loaf – just perfect for sandwiches.  And so much more nutritious than anything you can get from the store.  Enjoy!

5.0 from 1 reviews
Print
Whole Grain Sandwich Bread Small Batch
Author: Andrea
Recipe type: Bread
Prep time:  20 mins
Cook time:  30 mins
Total time:  50 mins
Serves: 2 loaves
For those of you who are milling your own flour but are using a mixer other than a Bosch or Ankersrum, this is a method for making two loaves of whole grain bread. The results will be similar to using one of my mixers, but you'll have a little more time involved. Win some, loose some!
Ingredients
Instructions
3.5.3208